I've been being VERY crafty lately.

Which could be a valid excuse for not blogging. :o)

But then again, that's a pretty lame excuse considering the amount of time I spend on the computer each day...but let's just forget about that part, okay?

I'm part of a virtual quilting bee (see button to the right), and the first block we have to make is a Spiderweb block. With corners and points that have to match. And I. AM. SCARED.

I can sew straight lines kinda okay, but I don't know anything about joining points and corners! Especially for someone else, you know?

Like, I can sew a pretty good project for someone who is a friend and will love me whether I sew a straight line and match the points or not. But to make a block for someone I don't really know? And expect her to like it?  Again, I. AM. SCARED. So I made this block as a sample using scraps from fabric I already had (or bought so I could put it in the samples I'm going to make from all the virtual bee blocks.)

Honestly, I can do "wonky", and I can do "improvisational", but I don't think I can do "unintentional".

To my little brain, unintentional = chaotic.  (And the top of my sewing room (dining room!) table is VERY chaotic right now! Scraps are EVERYWHERE. It hurts my eyes.)

But, my eyes are soothed when I look at this finished block! :o)  I learned a few things, and hope to put them in place when I use Abi's lovely fabrics to make the block I will actually send to her.

So, excuse me while I'm off doing new things and wallowing in chaos.

Oh, and actually working to try to finish The Baby Quilt. For which I did NOT beat the baby. (Jack was born on March 15th!)

I've still got some work to do, but the blocks are done, and I made a computerized mock-up to see what the tan sashing would really look like before I committed to it. I need to finish the sashing, and make the backing, then quilt (or send it off)

I need to get off the computer and fire up the sewing machine...I hope you have a great, and crafty weekend!
Posted by Melissa at 8:05 PM 3 comments:

Let Me Be Your Etsy!

A few weeks ago, I agreed to go along with the crowd, and make a removable camera strap cover for my new fancy-pants camera.  Tinkerellen thought we'd all want to be like her and make some, too, (she was right), so she set up a kind of a craft-along and said that if we wanted to be super cool (and avoid her crafty wrath), we needed to complete our camera straps by March 31st, and blog about them by April 1st.

I was "do I have to commit to a deadline???" and my neighbor-friend, Kelly, was "in????" so we asked another friend, Emily, to join us for a sew-along at my house one day. Kelly brought (and used) her camera, and took some fun pictures (and one awful one of an unfortunate pregnant lady sitting near my daughter in front of a sewing machine, ahem). There were 3 toddlers, 1 baby, 3 mamas, and approximately 1,349,832 toys in the front room of our house. One sewing machine had never BEEN turned on (and, thus, the user didn't even know how to THREAD her machine!), one machine had some significant bobbin issues, and one sewing machine didn't have electricity run through it at all that day.

Oddly, the newby sewist (Emily) completed her goal (she scrapped the idea of making a camera strap and went with the much simpler bean-bag option) (which was not part of Tink's craft-along, but heck, she'd never even threaded her machine, so we can't fault her, right?).

And after our other neighbor-friend, Angie, fixed Kelly's bobbin malfunction, she was able to go home and complete her camera strap that afternoon (yay for naptime!).

Me? Well, I at least laid out my fabric that day! :o) And then I finished mine a few days later. Even though I followed the instructions (OH - here: removable camera strap tutorial), and I tried really really hard to keep my seam allowance at 1/4", somehow, my camera strap was REALLY snug. 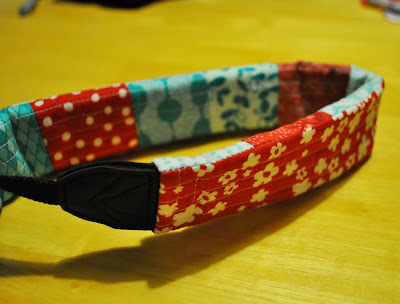 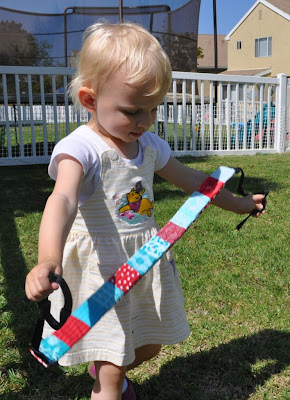 I love love love the color combination of red and aqua, but I don't really love how the colors were combined here. I wish I'd added more reds to the patchwork side. Ah, well, lessons learned, right? Good thing it's removable, because, for all I know, next week I'll want one with blues and yellows! :o)

Honestly, it was a REALLY simple, and VERY completable craft. If I could sew quickly, I probably would have completed it (the sewing part, at least!) in an hour. :o) I know camera strap covers are the latest trend, and if you're looking to buy one on Etsy, but have your own sewing machine, you can TOTALLY make your own! And save about $23!!