I finally started sewing my Bee Happy Bee blocks again. It took a little while to settle into our routine as a family of four, ya know?

I finally finished my May blocks for Alison (in July! Eep!). She asked us to make Liberated Wedding Ring blocks, which is a design by Gwen Marston. Alison gave us the scraps and some white solids, and asked us to make two blocks, and make them as scrappy and "liberated" as we wanted to. :o)

I took a while to start these because I, well, my brain freezes at the thought of lots of scraps floating around on my table. Plus, I knew I had to match points. Matching corners is tough, but matching points? Yuck!  Thankfully, Alison gave us a bit of grace and said the only points that mattered were where the colored strips came together, not necessarily the one in the middle. Whew! All high on my own confidence and abilities, I grabbed the remaining 4 small blocks, laid them out to make the rainbow effect, and realized I had a wee problem. Rainbow, rainbow, rainbow, random. What? Wait a minute! How did I get a random side? I'm supposed to...have...an...OoooOOhhhh....oops...shoot...dang...I accidentally sewed one of my "rainbow" strips to my "random" block. My block that had perfectly matched points. My block that I toiled over. Dangit.

I quickly took pictures and emailed Alison and asked what I should do. Should I rip it out (please, NO!), or should I just sew on?

Thankfully, she told me to sew on. Whew! More grace! Here's a picture of the rainbow and the random: If I hadn't told you about my error, you wouldn't have noticed it, right? Plus, Alison said, and I agree, that those kinds of things make the quilt's story, give the quilt character, you know? That's my job! Add character to the quilt.  :o)

Here is a picture of the blocks she had (mine weren't done yet) at our July LAMQG meeting. You can see that she wants to have some separation between the blocks so they look more like rings and less like a lattice. It's going to be beautiful when she finishes it! The June blocks were for Blossom. She gave us (perfectly) precut 4" squares of the solid tan, and a mixture of Denyse Schmidt's Hope Valley line. Frankly, I found that line to be boring and drab before I got my paws on it. Now, I love it! It's a lot brighter when the pieces are mixed together, I think. She asked that we make "wonky star" blocks, and I was intimidated. Again. Always intimidated by these Bee Happy Bee blocks! First the spiderweb, then the liberated wedding ring, now this? I know I joined this bee hoping to have fun, and learn some new stuff and build my confidence...and that's all happening, but it's more challenging than I thought it would be! Good challenging. Pushing-me-out-of-myself challenging. But my confidence level when sewing is pretty low, and so, because of my fear, I tend to stall and procrastinate and delay rather than dive right in and figure my way out.

As a member of the LA Modern Quilt Guild, I can participate in the monthly sew-alongs. When I prepared to go to the July one, I decided to work on Blossom's blocks. What better way to complete an intimidating project than surrounded by 13 people who are WAY more talented than you, right? I mean, I had experts all around me, and, believe you me, I used them! :o) I think I only finished one block, but I learned enough (and built my confidence enough!) to come home and finish all 4.

Here is a (poor) picture of all 4 blocks sitting next to each other. As per my usual quilting behavior, I goofed one up just a smidge, but it's hard to find (even though it jumps right out at me!) I'm excited to see what Blossom's final quilt looks like! You can see other blocks on our Bee Happy Flickr site. (Warning: you'll have to go back a bit since I was late to the party! You will notice my next source of severe intimidation and quilter's-block...Lori asked us to make dessert blocks! And the blocks the other Bees are making are STUPENDOUS!)

Regardless of my intimidation and fear, I really love being a part of making quilts with other people. Plus, at the end of the year, I can say that I've made 13 quilts, right? Just not all by myself! :o)

August is my month, so I need to get my fabric cut and packaged and ready for our LAMQG August meeting...they're going to be making a quilt for Sprout's new room! 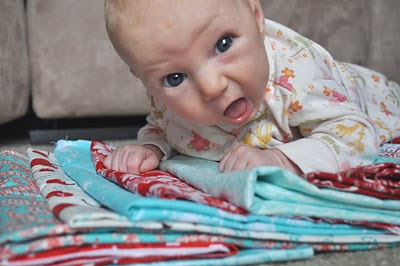 And speaking of Sprout, I hear her starting to stir...have a great week!
Posted by Melissa at 3:34 PM 2 comments:

Are You An Addict, Too?

I'm over at Aunt Spicy's place today, talking about my addiction, and talking about how humbling and incredibly awesome it is to be a member of the LA Modern Quilt Guild. 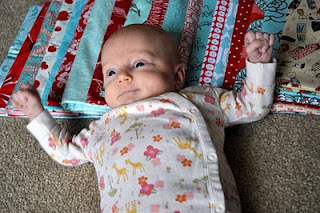 You should head on over there. Plus, there's a cute picture, or two, of my little Sproutling. :o)
Posted by Melissa at 1:57 PM 2 comments: