The Front Range Modern Quilt Guild chose to do a secret pillow swap for the Modern Quilt Guild's first challenge of 2013. The MQG partnered with Michael Miller to send guilds a fat eighth bundle of the lovelier than lovely Madrona Road by Violet Craft for each member who wanted to participate. We were allowed to add more Madrona Road, and solids, and we were highly encouraged to highly encourage participation among recipients of the fabric.

We were given our fabric and our partner's questionnaire at the December sew, and had PLENTY of time to finish it in time to swap at our February anniversary party this past Saturday.

We had 23 people participate, which is AWESOME, and there wasn't a single lemon in the bunch! Every single one of them was just gorgeous! 
The pillow that Anne made for Marta was the first thing she's sewn in 10 years! Wow!  Well done, Anne! 
The pillow Angela made for Marti is more meaningful and more creative and more amazing than any other pillow in the bunch, quite frankly. 
I wish Angela had finished it in time for Michael Miller to see it for their booth at QuiltCon. I think they would have picked it because it's awesome even if you don't know the story behind it.

And then there's mine. 
Honestly, I am more than a bit ashamed that I had the fabric longer than anyone, and yet I was the only one who didn't finish it in time. I mean, I have some really great excuses (had to make a second quilt for QuiltCon, had to catch up on my January blocks now that it's February, had 3 sick kids this last week so I got about 3 hours of sleep a night...on and on my excuses go!).  But the reality is, I didn't finish.

About 15 minutes before the meeting started, I had about 15 minutes of work left to do on it, so I went to the back room of our guild meeting space and tried to finish it. I couldn't do it. :(  It was really stressful, and I ended up trimming the top of the pillow wrong. :(  So I just decided to finish it later in the quiet of my own home.

I made my pillow for Randi of I Have to Say and the owner of FreshSqueezedFabrics on Etsy. You know her. :)  She is wonderful and generous and friendly and such a blessing that I wanted to make her something she would love and that would bless her back for all the blessing she does for everyone else.  But sometime on Friday, I learned that she wasn't going to be at the meeting, and though I knew I still wanted to complete it, I knew it would be okay if I didn't. And long about 2 am on SAturday morning, when I still wasn't finished, I decided to just finish it when I could.

Here it is finished. I made her a Dresden Plate pillow with a mini Dresden ruler I have. The teeny ruler was a little challenging to use, but I like the teeny 5" Dresden it made! :)

I added some hand stitching because Randi said she likes that: And here's a picture of all the stitching. Hand stitching, straight-line stitching, FMQ loops, and FMQ stipples: Here's the back -- all Morning Glory. I'm going to be sending it to Randi tomorrow, so she'll have it by the end of the week.

And here are some pictures of my little man this last week. He has been sick, and was diagnosed with RSV yesterday. This was him Sunday morning. Poor guy just wasn't acting like himself AT ALL!! 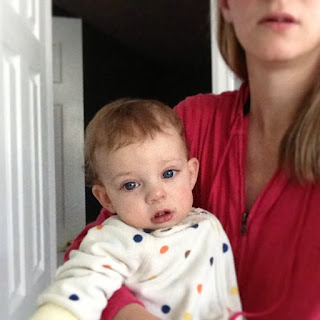 So I took him to Urgent Care. He didn't like the poking and prodding, and eventually fell asleep. 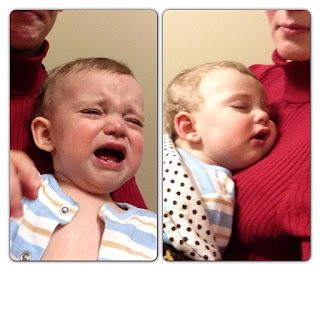 When the doc came back with a positive RSV result, they gave him a nebulizer treatment and sent me home with a nebulizer to keep up the treatmentsalong with some steroids. He slept through this one, but the one I gave him at home last night was TORTURE!!!! 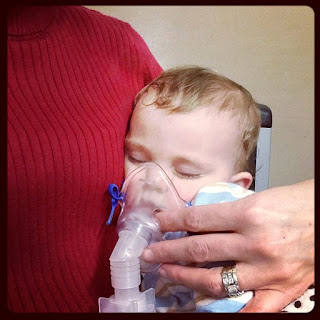 He's a bit better today, but still not himself. Thankfully he's a really healthy little guy, so I'm not worried that this will get worse, but it's just so tough for him right now! Poor little Buzz!

I hope you have a great week! Maybe I'll see you at QuiltCon!
Posted by Melissa at 12:13 PM 7 comments:

Yay! It's completely finished! I'll be taking this quilt to FedEx to send it to QuiltCon today. Whew!

It's (mostly) identical to the first, but here's a picture of this one anyway. The butterflies were made with Mrs Schmenkman's tutorial by the {Faith} Circle of the do.Good Stitches bee. We are giving our quilts to Restore Innocence, an organization that rescues girls from human trafficking (= sex slavery). The rainbow represents God's mercy, and His covenant with His people that He will never leave us. The butterflies represent being given a second chance. These girls need to know that God will not leave them, and that they have a second chance. (We all need to know that!) The black satin ribbon binding is Restore Innocence's "brand" or logo. The ribbon is for innocence (little girls love to wear ribbons), but the black is for how dark and disgusting and evil this HIDDEN crime is. It's going on right under your nose. That van in front of you on the highway? Maybe he's driving a few girls to a "date"... The girl in line behind you at the grocery store that won't make eye contact? Maybe she's buying diapers for her baby that was born into this slavery. The billboard advertising a "massage and spa" at the truck stop???

THESE ARE LITTLE GIRLS!!!

I'll repost this from last year, but the facts remain the same. 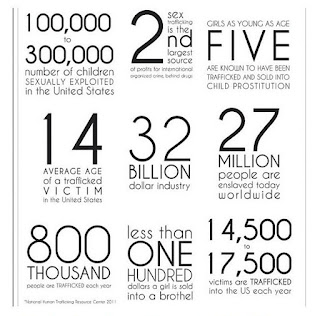 I'm linking up with Crazy Mom Quilts and her Finish It Up Friday linky party. I'm glad to be finished so I can make my January bee blocks! :)
Posted by Melissa at 12:12 PM 2 comments:

You know that old saying, "How do you eat an elephant?" Answer: "One bite at a time."

That's how I feel about my quilt for QuiltCon. I'm slowly working through all the stages to get it ready to send, but it is a SLOW process around here. I don't really get to work on it during the day, so after the kids are in bed, then I can start. But who is functional and efficient at 8:00 at night? Not me!! I'm slow. And slow. Or even slower. :)

So I do what I can, when I can. And I'm down to the last two steps. I sewed the label on this morning, only to realize that what I thought was the lower left-hand corner was really the upper right-hand corner...exactly where the sleeve should go!

I am pleased to announce that ripping out ladder stitches is much easier than ripping out any other kind of stitches I've ever ripped. :)

During naptime I was able to make a drawstring bag. It's not fancy, but I like it. And it was free. So tonight I'm going to put on the sleeve, and tomorrow I'll attach the label, and I'll be done!

Done, I tell ya! And the next time I'll see the quilt, we'll both be in Austin at QuiltCon! :)

Which, by the way, the Modern Quilt Guild has asked all attendees to link up with a post with a little information about me! 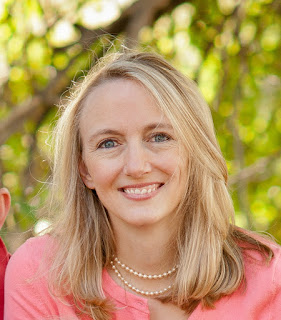 And here are 5 things you might not know about me:
And in case I'll see you at QuiltCon, but you don't normally read my blog, here are some other tidbits:
Good enough.  Now...WiPs! :)

Like I said, I'm almost finished with Hope Takes Flight 2.0. I'll be boxing her up on Friday so she can get to Austin in time. :)

But one thing I do want to share with you is a fun little finish. Sorta. It's a finish of finishes.

I made a calendar of quilts!  This is only a few of the pictures, but I think it's a really fun way to remember what quilts I've made or been a part of making. 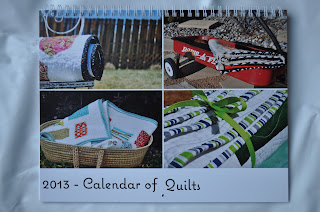 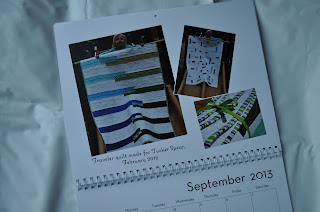 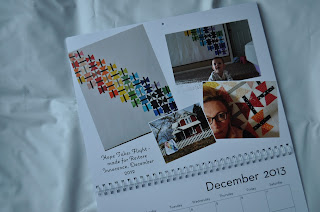 Hope you have a great week!

And, of course, the MQG QuiltCon link up! :)