Hopefully you've had a great week - in your crafts and everywhere.

Mookie, my oldest, has just wrapped up her first year of preschool, and as much as I love her school and her teachers, I'm glad we are on summer vacation now. Whew! 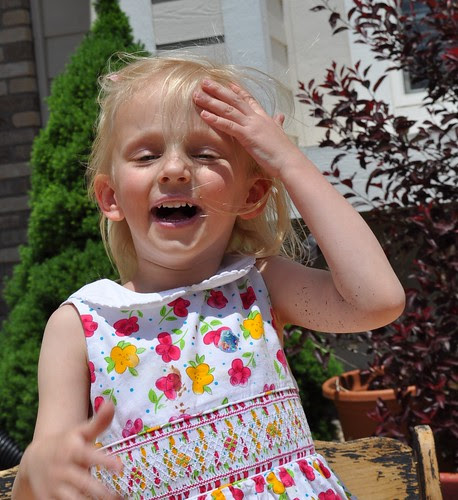 (This isn't the best photo I took that day, but it's my favorite. I don't want to forget the sound of her laughter.)

As an added bonus, Dave is home for a little bit, too! Life just seems more leisurely right now, and that's just a good feeling. :o)

My mod mosaic block for Yolanda. 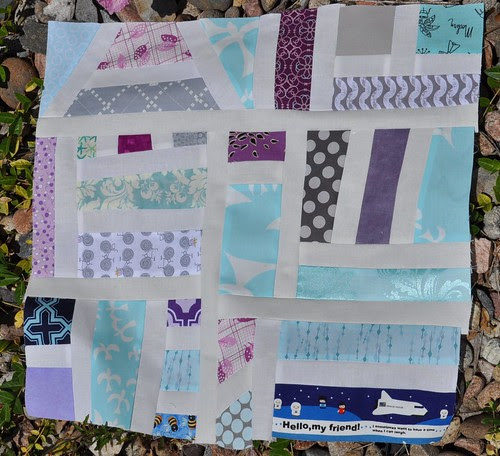 That's 18 1/2" of mod mosaic goodness right there, folks. Big, yes, but also a treat since I could fit a bunch of special fabrics in there. (if you click the picture, you'll go to Flickr, and can see the notes on the block.)

My Ohio Star blocks for May for the {Faith} Circle of the do.Good Stitches bee. 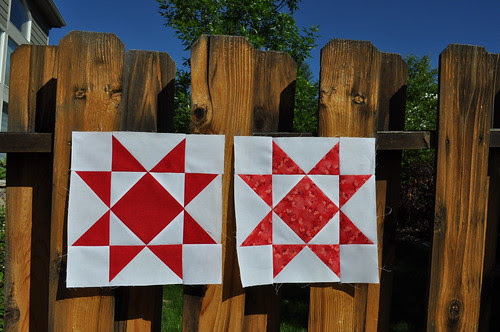 Kelsey asked for simple, red and white stars to make a quilt for an elderly couple at church, using this tutorial. I really love the crisp look of red and white together. I asked Kelsey if she needed extras because these were so easy to make! They are instant coffee compared to the slow-brew of the mod mosaic block! And I am a slow sewer. :o). Swoon, these are not!

Alas, she only wanted 2, but I can definitely envision myself making a star quilt in the (distant) future. :-) 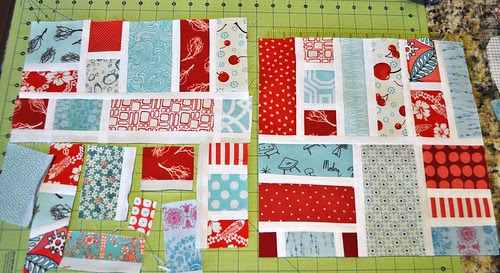 These are only 12 1/2" square, but are still time consuming! Alisha wanted red and aqua blocks, and I've still got plenty of that to spare! :o) While I was working on hers, I had planned to make some headway in to a red one and an aqua one for my mod mosaic quilt, but, alas, I got tired of the tiles and grout. Go figure. :o)  I calculated, and since the end of February, I have made 12 mod mosaic blocks...and not a one of them for me! Maybe in June...

And here's a picture of my little flirt: 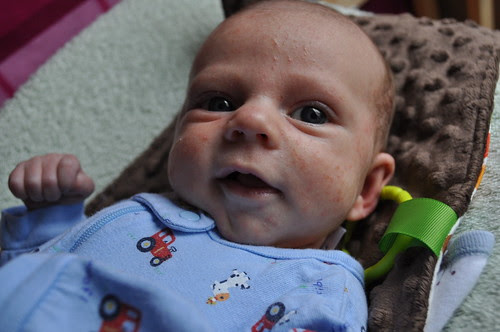 I just realized that I left out my Pea-pie! My sweet pea, my little sproutling. She turned 2 a few weeks ago, and MAN, is she 2!! Wow. 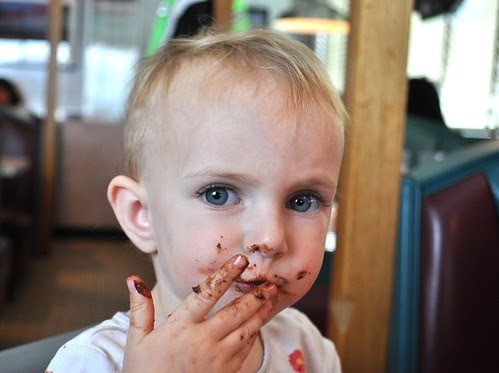 (enjoying a little pancake with her chocolate chips) :)

And, back to my list:
For now, though, I'm going to concentrate on getting 1-5 done in the next 2 weeks.

Gosh, that makes me tired just to think about! I hope you have a wonderful, craft-filled week!

I didn't get hardly anything done this week, so my WiP list is just as long, if not longer, than it was last week.

Man, I love it when that happens!

Here's what I did finish, though: 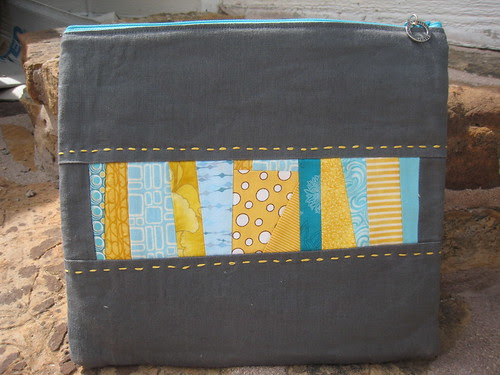 Did I tell you much about it last week? I'm part of the {Faith} Circle of the do.Good Stitches bee, and we decided to have a little pouch swap to get to know each other better. Well, I was given Alecia's name, which was great because her style and mine are really similar! She likes yellow and gray and aqua together (easy!), she loves linen as a neutral (had some!), and wanted a zipper.

Hold the phone. Me and zippers? Well, we've tried to have a good relationship, but last time we broke up, harsh words were spoken, and I vowed to never bring one into my home again. :o) I'm only half kidding...there were definitely harsh words spoken.

You can see that I did some improv piecing of the yellow and gray. Well, not really improv because I alternated the colors, but definitely wonky. Then I filled in with the gray linen, measured out my lining fabric and stitched the pieces to the zipper.

And quickly realized that this gigantic bag (measuring 10 x 12"!) wasn't going to hold up very well by itself, and needed some kind of interfacing. So I did what everyone would do, and got on Facebook and asked for help! :)

I used fusible web to attach some batting between the layers, and then hand-stitched the yellow above and below the pieced area. Then I went back to the sewing machine to sew it all up.

And quickly realized that I had screwed up, yet again. When you make a pouch the right way, you can sew it so the seam of the lining is sewn inside. I, however, was not going to be able to do that because of the hand quilting and the outer piece being fused to the inner piece. Shoot!

I blame the zipper. Back to Facebook, and someone suggested turning it inside out and binding the lining! Brilliant! Facebook and quilting go hand in hand. :)

And, after much coaxing, pleading, and harsh words, I finished it, and was able to turn it right-side out, and zip it! Yay!!

My next unexpected hurdle was the zipper pull. I found a little ring that says "believe" that I wanted to put on there, but didn't like my fastening options. So I got some split rings (like mini key rings) and attempted to attach the zipper to the pull.

More harsh words were spoken in my head.(children were present) Again with the zipper. It's all the zipper's fault!! MAN those little rings are a bear to attach! Heck, I think it would have been easier to attach a real bear to the zipper than that little pull! But, I gotter done, as they say, and I really do love the pull. 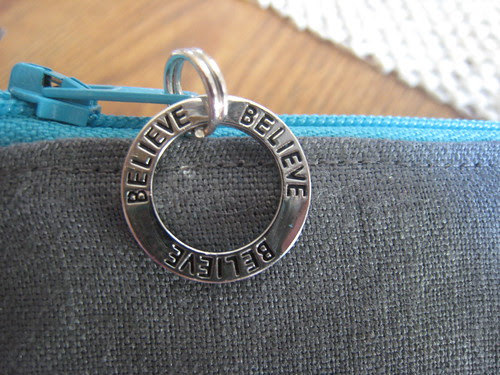 I put a few treats inside, and the little pouch hitched a ride on the Pony Express and found its way to its new mama. Alecia says she loves it, and I really do hope the bag brings her hope and encouragement and a smile every now and then. :)

SO...that leaves us with what I did NOT finish this week!

Tomorrow. Tomorrow I must sew. I hope you get to sew some, too!

Let's see how quickly I can write a blog post. There is so much to write about and SO much to do and God only knows how much time I'll have before Rocket Man wakes up and won't let me get anything else done!

I don't know if I've actually finished anything this week. It's all a blur.

Here's what I'm working on, though.

You know I've got a million other things I want to/need to be doing, but these are the things on my immediate to-do list. 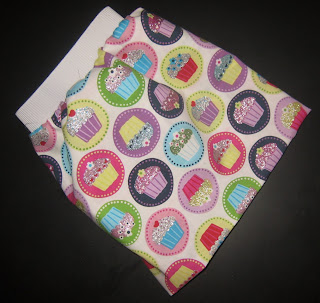 OH, I did finish something this week! :o)  I made cupcake skirts for my two little girlies who are having birthdays this month. For the first, I followed a tutorial for a "fat quarter skirt" that I found on Pinterest, and I'm not going to link to it here because I really hope that no one decides to go to it and try to follow it! Seriously. A) My kids are skeeeeny, and a fat quarter wasn't enough fabric for their skirts; B) the tutorial is poorly written and assumes quite a lot, and just isn't very clear. There was a lot of wingin' it going on, and a lot of words I don't usually say getting said. Here is a picture of one of the skirts...which I am ripping out and redoing like I did the other one.

I hope you are all having a week where you are aware of the many blessings around you.

Does it take everyone eons to write a blog post, or is it just me?  That's why I never write them anymore...it just takes too dang long!

I've got a lot of WiPs this week, and only one real finish. The dang heart that I made way way way too complicated for my own good! 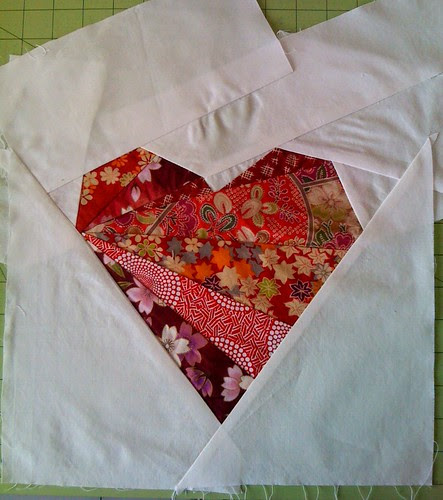 Rosanna (from the Bee Happy bee) (the best bee EVER!) gave us some Asian fabrics and asked us to make a pieced heart, any way we wanted. Well, this didn't actually end up how I really wanted it (I wanted the top to be curved, not straight-edged like it is), but I just didn't have the brain cells, or the time, or the will, really, to figure it out. My primary goal was to have the fabrics radiating out from the side like that, and go from there. Well...that's what I got! :)

And I want to say a BIG Thank You to Katy Cameron for all her paper-piecing counseling. She was busy, and 5000 miles away, but she was always quick to help me through the next challenge. :)

Now I can move on!

For Bee Happy bee blocks, I've got to make Natalie's book shelf block. Just look at what some of my other bees have been doing! Ridiculously fabulous! (These were done by Liberty and Kelly)

And then I've got to do Nicole's Gee's Bend inspired block. Every single one of these is ah-MAY-zing!! Here's Lori's: 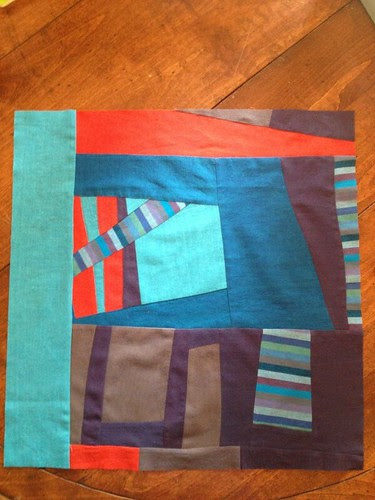 (I don't know why that one won't play nice and line up with the rest of them. See? THIS is why it takes me so long to write! Silly Blogger!)

And Alison is sending out her fabric this week for us to make a couple of word blocks. I have to come up with one word that represents the Bee Happy bee for me. One. ONE? Impossible!

Then in the FRMQG, I've got to make a little house block for Audrey.  I drew out the house, and was all ready to start paper-piecing it when my oldest found the design, and decided to dig through my scraps and build her own fabric house. Not bad for a 3 year old. :o) 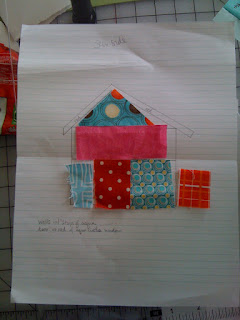 Lots and lots of red in my blocks this month! :o)

I've also got to make a pouch for a swap in the {Faith} Circle. I've got my design all planned out, I just need to find a way to sit at the sewing machine. And actually S-E-W!!

And some baby projects to finish for friends. The economy must be picking up the way babies seem to keep happening all around me! :o)

AND...I've got another long blog post to write about the wonderfulness of friends. I've been a mom of 3 for a whole month now, and I'm hoping that my time management will get better real soon.

I hope you have a wonderful week!

The reality is more like this: lots of feeding, a little cleaning, not much sleeping, and very little sewing.

I did get my Mod Mosaic blocks done this week (those always seem to take me SO long! Why??) 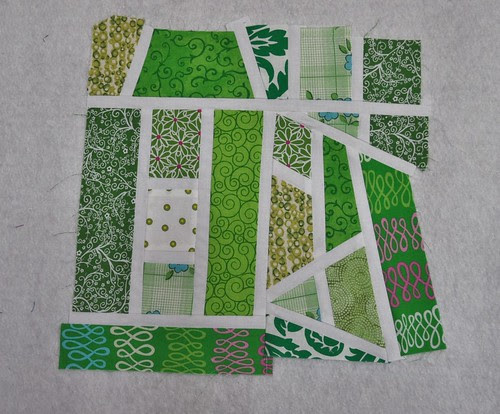 Jeannette (GoneAussieQuilting) asked us to make monochromatic blocks, similar to mine, but she's going to sash them with Kona solids (a la Bottled Rainbows), and asked us to make blocks to correspond with the solids she had. I made one for Kiwi and one for Candy Pink. That quilt is going to be SO SUPER COOL!! I seriously can't wait to see it...and seriously might just copy her and sash my monochromatic blocks in the corresponding solid. 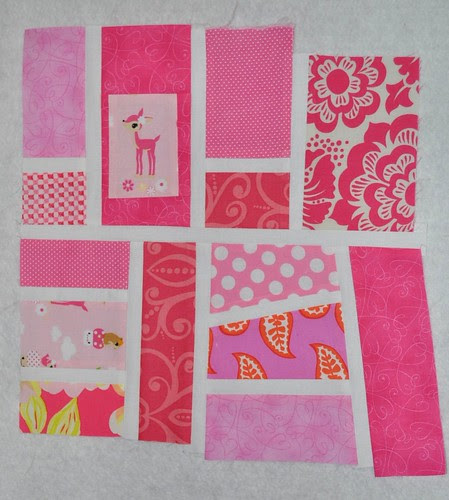 So, I've still got my heart block to finish sewing the white on for Rosanna, my bookshelf block for Natalie, my Gee's Bend block for Nicole (all of the Bee Happy Bee). And I've got to make a house block for Audrey for our guild bee. I've also got 2 new Mod Mosaic blocks to make and 2 red and white stars to make for the {Faith} circle of the do.Good Stitches bee.

And a baby quilt to make. Sometime. I'm really excited to finish this one, though. I know I'm gonna love it -- and the mama will, too! But I just have to catch up on my bee blocks. I feel obligated somehow!

And I also want to/need to write a blog post about some incredible gifts that Rocket Man has received. But where does the time go??

Where does it go? (sigh) I hope you're having a great week!
Posted by Melissa at 8:49 PM 4 comments: