Welcome to my little stop on the Hexie Queen Blog Hop!

I was really humbled when Madame Samm contacted me asking if this rainbow hexie quilt was actually mine.  It was. :) 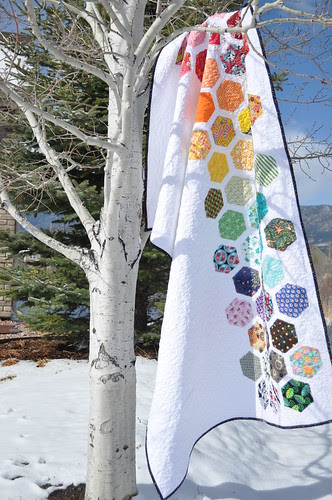 A friend had sent her a picture from Pinterest, and she wasn't sure how to get to the original blog post and quilter. She found me, though! :)  She told me all about the Hexie Queen Blog Hop, and it sounded like SUCH  fun blog hop that I jumped in feet first! :)

So one Saturday, when I was supposed to be working on a million other things, including potty-training Little Bird, I decided to start my hexie quilt instead. She helped. ;)  A couple of years ago, I participated in 5 rounds of the Hexie Swap on Flickr, and one round was all solids, so I had about 50 pre-cut hexagons, just waiting for a project! They were cut with the Accuquilt Go cutter, and they're perfect for a quick project like this!

Once Little Bird and I had decided on the colors we wanted to use, I set her free with her own stack of hexagons so she could make "her own" quilt. She didn't really do much with hers, but it gave me the chance to get mine all laid out. :) 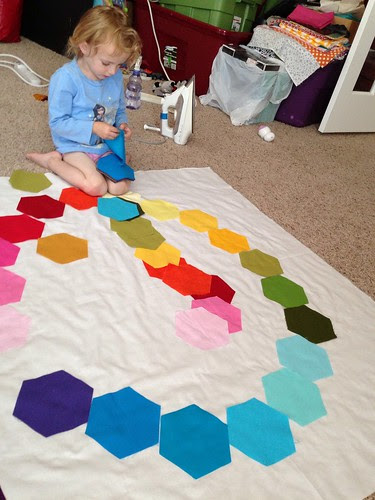 Once I had the layout I liked, I adhered the hexies to the top of the 44" square of Kona White. I used the same method I used when I did my first hexie quilt. I sprayed the back with spray baste, and pressed it down with my hand. If I needed to adjust it, I could. 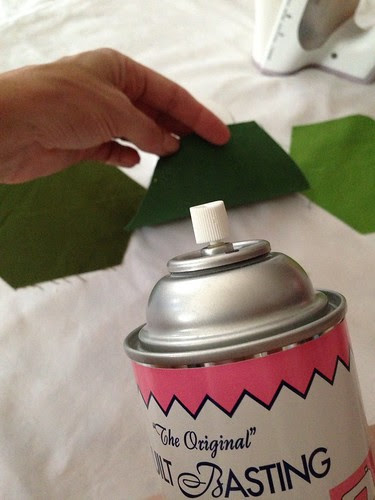 The next step was to heat set the hexies in place with a hot iron. I used a random scrap of fabric to protect my iron from any overspray of glue. 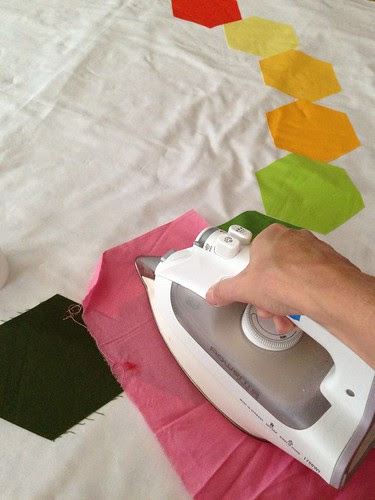 The beauty of heat-setting them this way is that when I inevitably had to put the quilt away, I could go away trusting that the hexagons wouldn't move a millimeter. And little hands couldn't move them, either. Security is a good thing when you've got curious little helpers around the house! :)

A couple of hours later, I was able to come back to the quilt. I raw-edge appliqued each hexagon in place with a straight stitch 1/4" in from the edge. I didn't want to stitch over any other stitches, so I stopped where I started, and tied a knot on the underside of the quilt top. 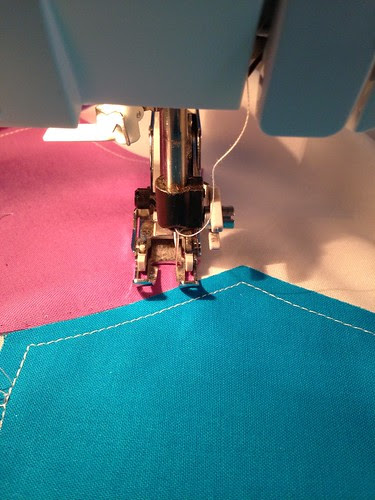 When the quilt top was finished, I just felt like singing! It felt soooooo good to put the must-do list aside and just follow the inspiration for once! 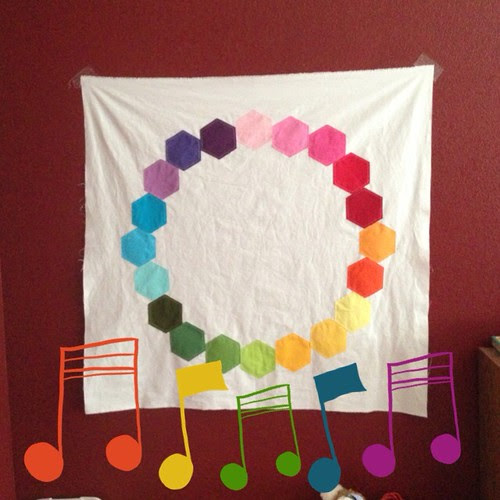 And then it came time to quilt it. I had a hundred ideas (and two more after I started, ain't that always the way!), but I went with a straight line between opposite hexagons, and then a spiral throughout the whole quilt. 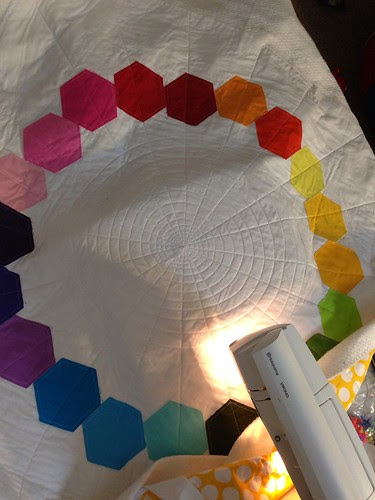 Spiral quilting takes foreeeevvvvvvvvvvver! :) And this is a small quilt! I can't imagine doing it on a larger quilt. Sheesh! 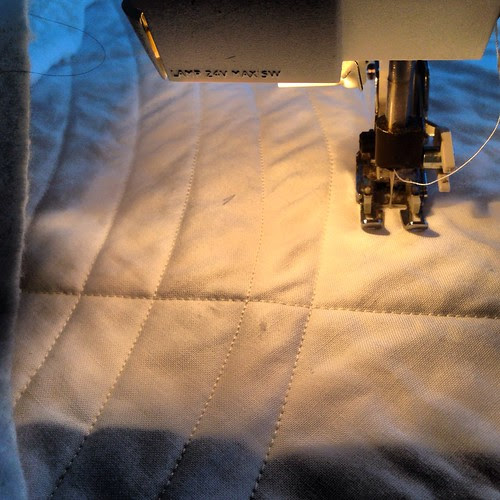 Here's Little Bird claiming "her quilt" once again. :) I've never made a quilt just for the fun of it, so I've never had the chance to have one of my children claim it as their own. I'm not sure if she really thinks this is for her, but, other than it being a bit small for a 3 year old, there isn't any reason I can't give it to her! :) Plus, then I would get to enjoy it, too! ;) 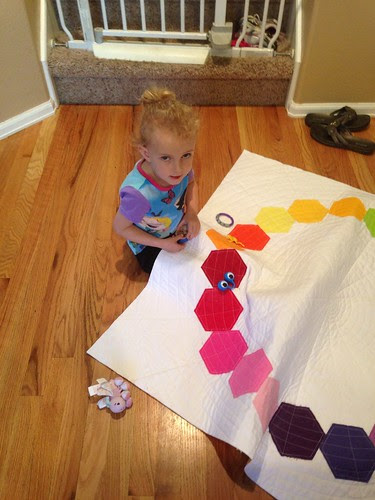 Do you know this trick when you're attaching your binding to your quilt? I either wrap my binding around a pencil or an old thread spool, and then stick it on the extra thread stand on my sewing machine. It really helps keep the binding straight and orderly while I'm attaching it. Sure beats the pile of binding I used to have on the floor! 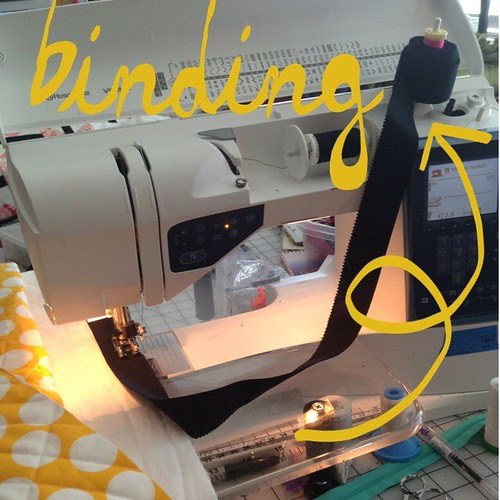 Here she is again! This time she is tracing the quilting lines with a play-doh cutter. :) Maybe she's just as attracted to rainbow quilts as I am... ;) 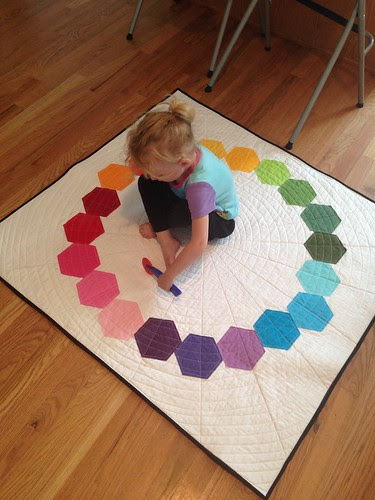 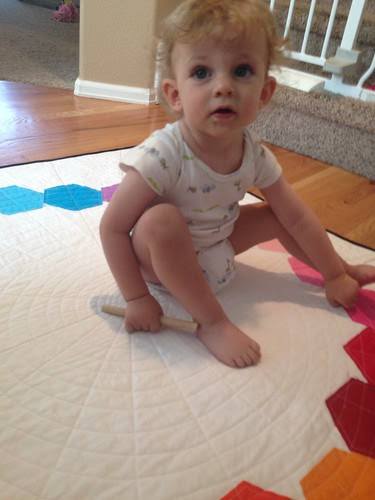 It's hard to tell in this picture, but I backed it with a random yellow-and-white polka dot fabric I had. I'm happy to use something that I already had on hand. Going to the fabric shop with 3 little ones is NOT fun! For anyone! :) 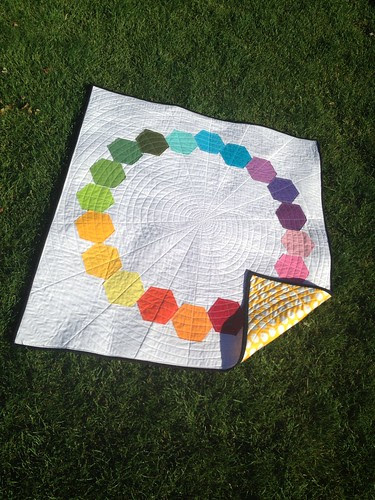 You can see the quilting a little better here, I think. I realize it looks a bit like a spider web, but c'est la vie. I like it. And I have an even greater respect for spiders now! This web was TOUGH to weave! 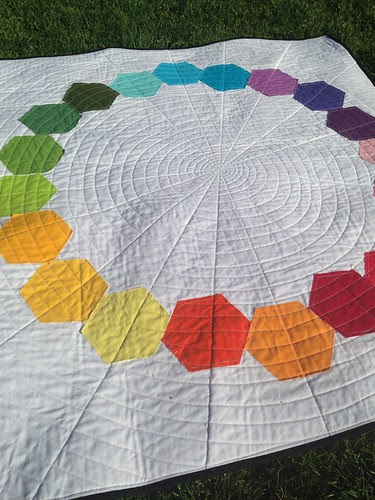 I hope you enjoyed learning about my little hexagon quilt. Where else have you been on this Hexie Queen Blog Hop? Here is a list of the others that are posting today. If you haven't already been, you should go visit their blog! I am confident inspiration awaits. :)

Creatin’ in the Sticks

Let’s Patch it Up

Thanks for stopping by today! I hope you enjoyed my little hexie project! :)
Posted by Melissa at 12:00 AM 99 comments: